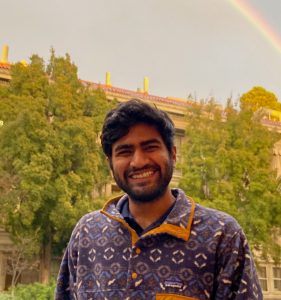 My goal is to study evolution beyond the mean-field limit. In particular, most quantitative evolution experiments focused on “well-mixed” microbial populations in test-tubes in part because of their short generation times and the ability to pause and later restart evolution from frozen fossil records. However, in nature, most microbes exist instead in complex, self-organized structures called biofilms. These densely populated communities are encased in a matrix of protective extracellular polymeric substance (EPS), and can colonize almost any surface, including in natural hot springs as microbial mats, on pipes leading to biofouling, and inside the human body causing deadly infections.
The key question then becomes: how does evolution interact with self-organization in these spatially structured environments? As Phil Anderson taught us, “[m]ore is different”: interactions fundamentally change the underlying nature of systems. It is my goal to quantitatively disentangle the effects of evolution on self-organization and vice-versa using a combination of theory, simulation, and modern microscopy (in collaboration with the Ji Lab at Berkeley).